How Do Free Apps Make Money? Here’s a Complete Guide 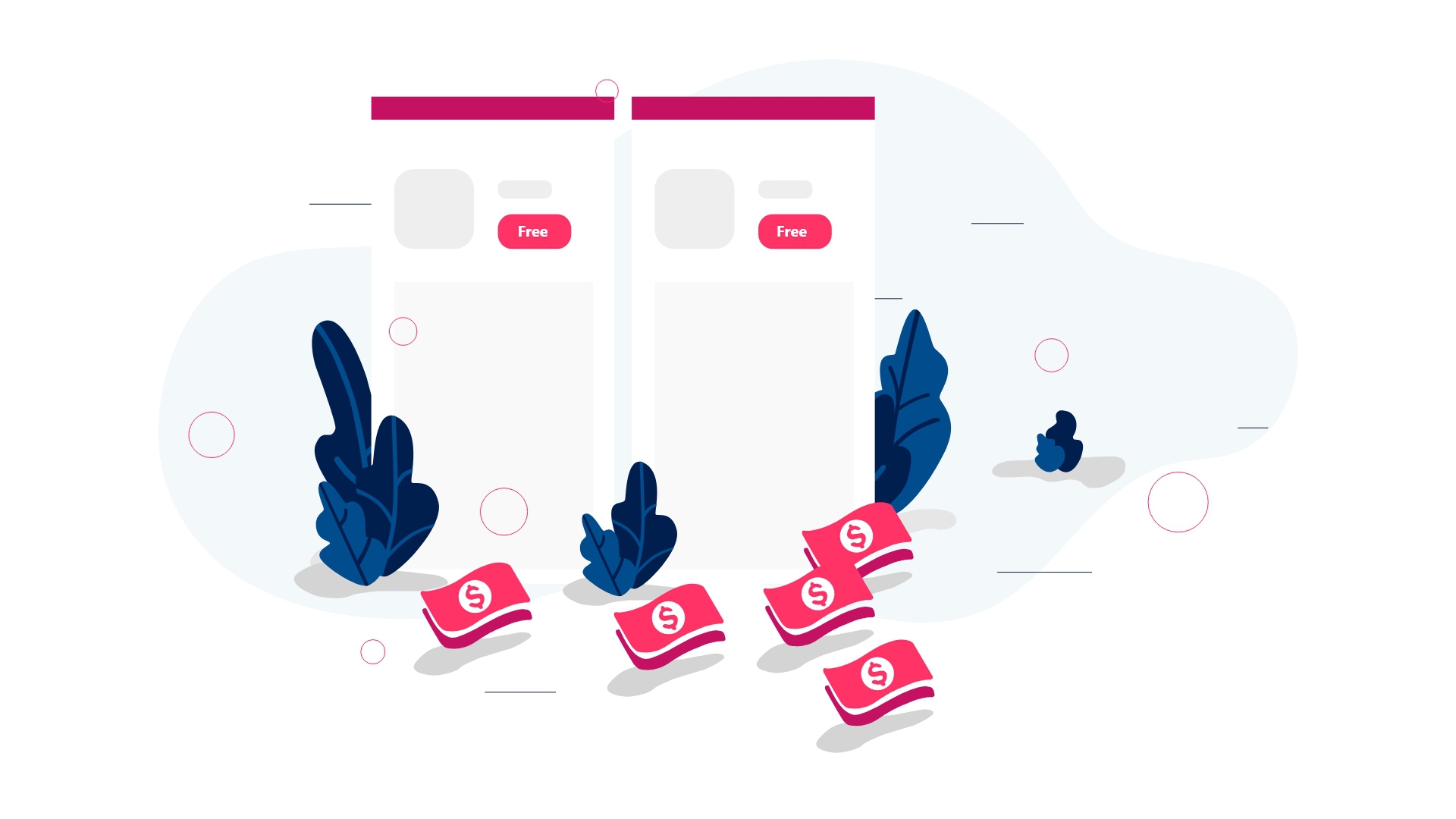 Mobile applications, colloquially known as apps, are tiny little nuggets of joy. You can use them to pay bills, play games, talk to loved ones around the world, order food, or even find a date.

It’s no wonder why mobile apps are taking over the world, with the average consumer spending an estimated five hours each day on their mobile devices — 92% of which is spent on apps.

Suffice to say, there’s a good chance you interact with about a half dozen apps on any given day. It’s also quite likely that most of those apps are free to download.

But if developers aren’t charging anything, how do free apps make money? Read on for a quick guide on common monetization processes and what they mean for you as a consumer.

Why Release A Free App?

If you’re a first-time developer or have a passing interest in the industry, it’s understandable that it may seem baffling to release an app for free.

According to Google Play, 98% of downloads from the Google Play Store come from free or freemium (a free-premium hybrid we’ll get into in a bit) apps.

That’s millions of apps downloaded — all for free!

But when you stop to consider the habits of most people, it actually makes a great deal of sense.

Let’s say you’re at a grocery store doing your weekly shopping. As you lazily go through the aisles, you come across a small cart of samples with a giant sign that says ‘FREE’ in great big letters.

Your heart skips a beat and you happily take a free sample. A few minutes later, tiny toothpick still in hand, you turn down the frozen food aisle where you see that very product you just sampled.

You enjoyed your sample, so you decide to buy a box. Replace a grocery store with a mobile marketplace and you now have a thorough understanding of how free apps make money.

In short, free apps aren’t always “free” for very long. They’re banking on consumers spending their money in some capacity down the line.

So if free apps don’t stay free for very long, how exactly does the process work?

Earlier we mentioned a word that you may not be familiar with, freemium. Even if you’ve never heard the term, you’re undoubtedly more familiar with it than you know.

Through a freemium model, the initial app itself is free to download. Users have access to the core features of the app, with others locked behind a paywall.

The user is presented with an option to pay a small fee and unlock access to all features within the app.

The most common example of the freemium model involves something we’ll talk about in a moment, in-app advertising. A user may pay a few dollars for a better, ad-free experience.

When discussing how free apps make money, we can’t ignore the power of in-app advertising. Think of your prior web browsing experiences.

Once an app is popular enough or if the developers strike the right deal, companies can buy digital real estate within the app itself.

Banner apps are a good example of this. They’re relatively unobtrusive, but without paying a fee, the user can’t get rid of them.

Interstitial ads are quite popular among the mobile games industry, too. If you’ve played a free-to-play game on your phone, you’ve likely seen these ads. ‘Watch a 30-second ad for 2X the coins’ or ‘Unlock a new character by watching these sponsored videos’.

Whichever model you choose, make sure it doesn’t hinder the user’s experience. Sure, watching a 30-second video may take them out of the experience, but that’s quite different than having them click through a dozen pop-up ads. Be smart about your monetization.

In-app purchases are technically part of the freemium model but are powerful enough that they warrant their own mention.

Offering users the ability to purchase digital goods such as clothing for their avatars, new characters, or even new features, is a smart way to offset the cost of app development.

Sometimes the best form of monetization doesn’t even involve the app directly. There’s still quite a bit of power in physical merchandising.

From apparel to toys to mugs and glasses, offering customers the ability to purchase merchandise is still a viable method of getting income, even if it doesn’t involve your app’s interface.

If the age of Netflix and Spotify has taught us anything, it’s that customers love subscription-based services. In fact, 9to5Mac believes that in-app subscriptions are going to the future of the industry.

Admittedly, these can be hard to pull off. You’ll need to outline your terms and services quite thoroughly so customers have a clear picture of what their subscription gets them.

There’s a great deal of controversy surrounding our final monetization method, but it’s worth mentioning nonetheless.

If it sounds a little shady, that’s because it is. In fact, it’s been the direct cause of several lawsuits against popular companies like Facebook.

So why use it if it’s so devious? Well, it doesn’t need to be so scary.

If you’re upfront and honest about what you’re using the data for — often to help advertisers target their customers better — you shouldn’t run into any problems. In fact, it may be a worthwhile as any other method on this list.

How Do Free Apps Make Money? A Few Closing Thoughts

If you’re wondering how do free apps make money, we hope this article demystifies the process. However, this article only scratches the surface. There are tons of new and innovative methods hitting the market at a rapid-fire pace.

Whatever monetization method works for you, make sure you’re upfront with your consumers. Let them know what their data is used for, or how their purchases influence a better app experience for themselves and their co-users.

If you’re looking for some help with the development process, be sure to get in touch. Our team of experts can help turn your app idea into a money-making reality.